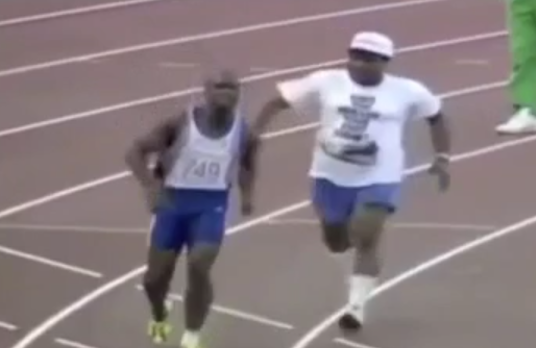 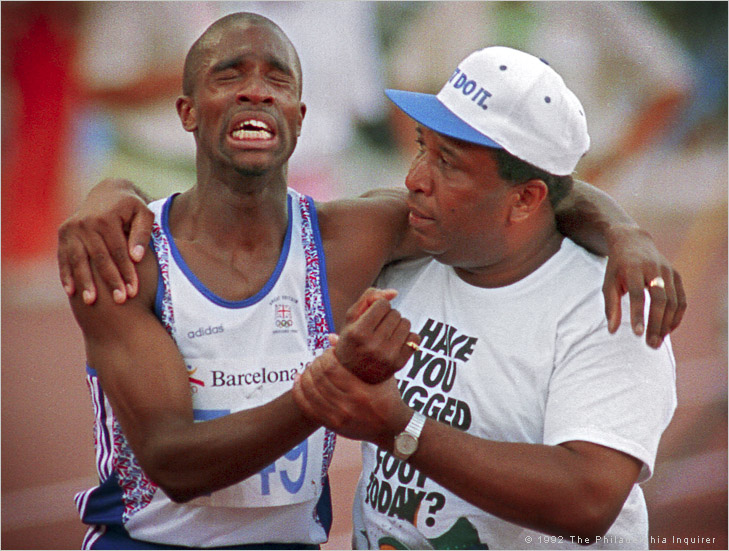 Derek Redmond of Great Britain is in agony as he is helped to the finish line by his father, Jim, after tearing his hamstring muscle in the semi-finals of the men’s 400 meter run.
Redmond collapsed about half way through the race with the injury, but got up, determined to finish despite the pain. His father came out of the stands and onto the track to help his son. Redmond initially tried to push him away, not realizing who he was, but then heard a familiar voice. “Derek, it’s me” his father said.
Redmond told his father “I’ve got to finish this race.” His father said “If you’re gonna finish the race, we’ll finish it together.”
With his father’s help, Redmond made it to the finish line.
Redmond, a brilliant runner whose career was plagued by injuries, had previously suffered a similar fate during qualifying for the 400 meter race in the Summer Olympics in Seoul, South Korea. In a qualifying heat for the 400 meter race, he pulled an Achilles tendon, an injury that led to five surgeries.
Later, watching a video of that 1992 Olympic race, Redmond said “I don’t think I’ve ever cried so much in my life. It’s more embarrassing than anything else–men don’t cry.”
Photo by Jerry Lodriguss / The Philadelphia Inquirer